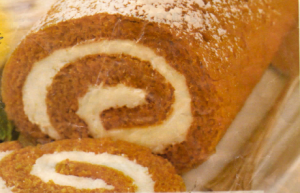 But, alas, I believe in honesty.

And Chelsea & I made the world’s ugliest pumpkin roll. Haha! It was really so funny and even more importantly so. much. fun.

I needed a baking night with a gal pal, and the hubbies enjoyed it too! They watched BuzzFeed videos on the couch as we made a mess in the kitchen. And I mean a mess. I should’ve taken a photo of THAT. We baked and baked and thought we were making the world’s prettiest pumpkin roll (it did come out of the oven beautifully), but then when we rolled it, the thing TOTALLY fell apart.

Hahahaha! I think it’s SO funny! That poor little thing. We oooo-ed and ahhh-ed, and then OHHH NOOO-ed and he didn’t even see it coming. Haha!

He was no Apple Crisp or Pumpkin Oreo Cheesecake… That’s for sure. (Those were success stories.)

In little rolly’s defense though, he is DELICIOUS. Soft pumpkin bread with maple cream cheese icing on the inside. There’s really not a thing in the world wrong with him except for that outer appearance.

But I still might try again tomorrow night to see if I can make a prettier product… I am supposed to take it to Friendsgiving this weekend, after all…

{Update: I tried again and there’s a success story too!!}

What do you think? Cancel reply

My name is Ginger.

I love coffee date mornings, jamming to 90's rap on roadtrips with my handsome hubby, and making things for people.

Be sure to say hi and stick around a little while. It's so nice to meet you :)